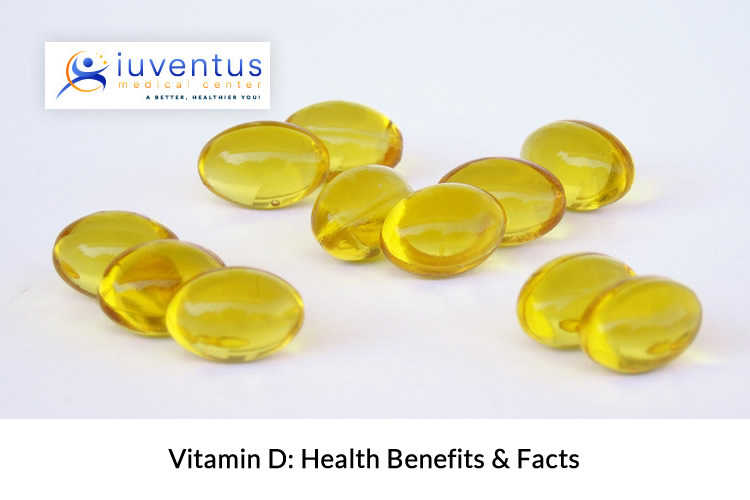 Vitamin D is often referred to as the “sunshine vitamin” it is produced by the body in response to sun exposure. Vitamin D can also be found in certain foods and supplements. Having enough vitamin D is a precursor to healthy teeth and healthy bones. It may also protect against conditions such as multiple sclerosis, diabetes-1 and cancer.

There are many benefits of Vitamin D:

1. Vitamin D plays multiple roles in the body such as strengthening the bones and teeth.

2. Protects the health of the immune system, brain and nervous system.

5. Monitors the expression of genes involved in cardiovascular health.

Vitamin D plays a pivotal role in monitoring levels of calcium and phosphorous in the blood, two signs for keeping bones strong. Vitamin D also absorbs calcium in the intestines and retrieves calcium before excreting it from the kidneys.

Pregnant women who have low levels of vitamin D in their system have a higher probability of developing preeclampsia, thus mandating a delivery via c-section. Vitamin D deficiency was also responsible for gestational diabetes mellitus and bacterial vaginosis in pregnant women.

Several observations have pointed out the existence of an inverse relationship between risk of type 2 diabetes and consumption of vitamin D. In people with type 2 diabetes, insufficient vitamin D levels may adversely harm the insulin secretion in the body and glucose tolerance.

Children who were administered 2000 IU showed lower arterial wall stiffness as compared to those infants who were given only 400 IU. Vitamin D deficiency also resulted in atopic childhood eczema and allergic diseases including asthma.

Vitamin D monitors about 200 human genes which can turn imperfect if there is a lack of Vitamin D in our bodies. Vitamin D disease has also been associated with an increased cardiovascular risk, hypertension and multiple sclerosis, autism, Alzheimer's Disease and a host of other diseases.

Vitamin D consumption can be measured in two ways.: In micrograms(mcg) and International Units (IU). One microgram of vitamin D is equal to 40 IU of vitamin D. Although body secretes enough vitamin D, deficiencies can occur due to darker skin color or using sunscreen constantly and not being exposed to ultraviolet radiation from the sun, so essential for production of vitamin D in our body.